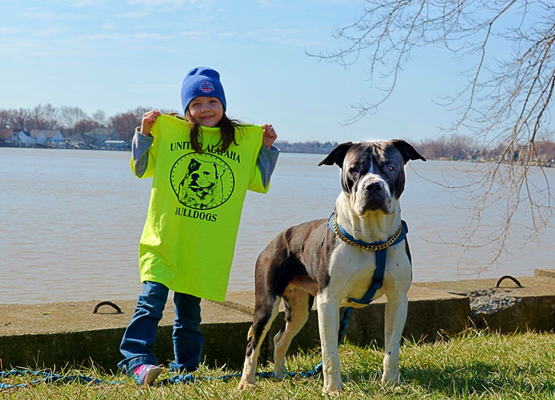 We are a family owned kennel with our first Alapaha purchase in 2009. Alapahas are known for being very protective, loyal and great with children. All of our dogs are family oriented and great with our children.

The ABBB is trainable, dutiful and responsible, with impressive capabilities as a guardian of family and property. They are great working dogs, very loving and protecting in the home, and are known to have a strong protective instincts. The Alapaha needs to be socialized early on and trained using positive reinforcement, rather than force-based techniques that can encourage aggression. We love our animals and hope you will take a look around.
We were recently interviewed by the Bulldog Social Club about the breed 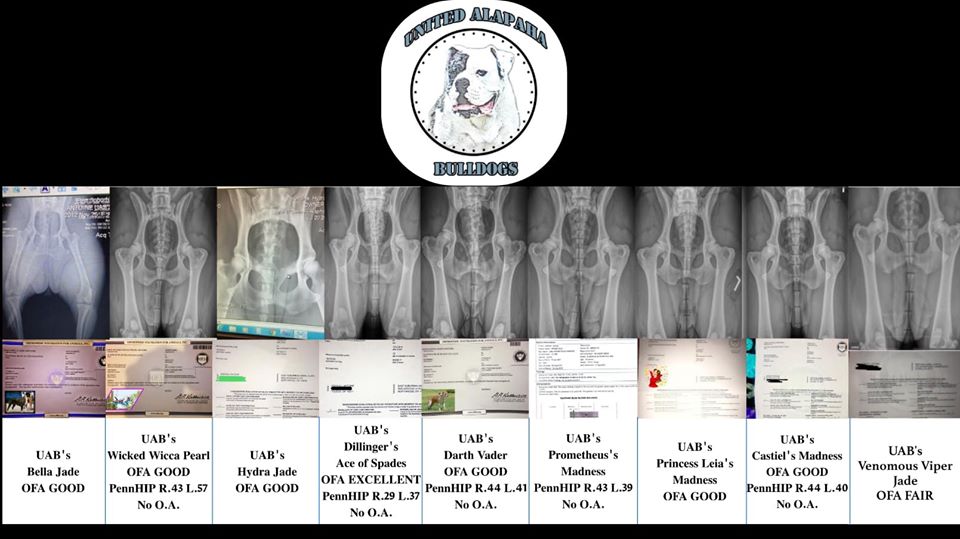 * This makes the first time a kennel produced a 1st, 2nd, 3rd, and 4th generation ABBB that has passed an Hip examination by OFA with official OFA paperwork. None of that “vet said” bologna.

At this time (10/02/2019) no other kennel in the world has produced 8 Alapahas that have received a passing Hip evaluation by OFA within their kennel for the future of their program or has 5 confirmed Alapahas well under the breed mean with PennHIP.
We are close to double digit of Alapaha Blue Blood Bulldogs thoroughly health tested, starting with the most important; HIPS.

We will continue to strive to breed better than what we have. Anyone can breed a canine but trying to lock in a healthy genotype with the right type of temperament is one of the hardest to do when breeding bulldogs. ANYONE CAN BREED A DOG, but it takes a keen eye to breed a healthy machine and that can only be done by health testing your stock and selectively pairing bulldogs accordingly. 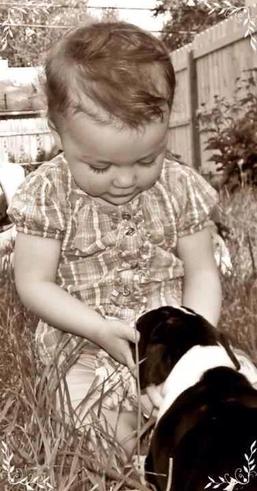 2 Best of Breed Bred By Exhibitor

1 Reserve Alapaha Specialty Best In Show with over 50 Alapahas

2 2nd place Bred by Exhibitor (competed against other breeds)

​Every show was with a minimum of 15 Alapahas present and with actual sanctioned judges.

1 Titled Dock Diving Alapaha with UAD
(placed 17th out of 100+ dogs) who eventually was invited to Nationals and then placed 9th out of close to 45 dogs (all breeds) jumping in her class.

UAB is the only kennel in the world with 9 OFA tested Alapahas with a GOOD rating or better.

UAB is also the first kennel to produce back to back generational OFA GOOD or better Alapahas. 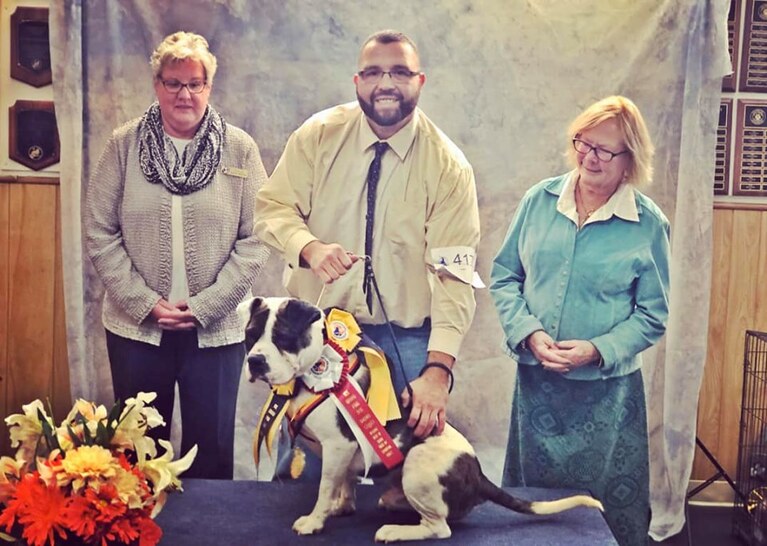 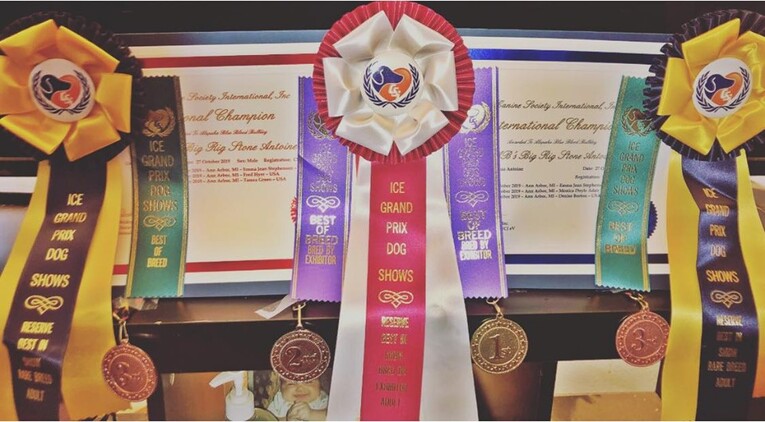 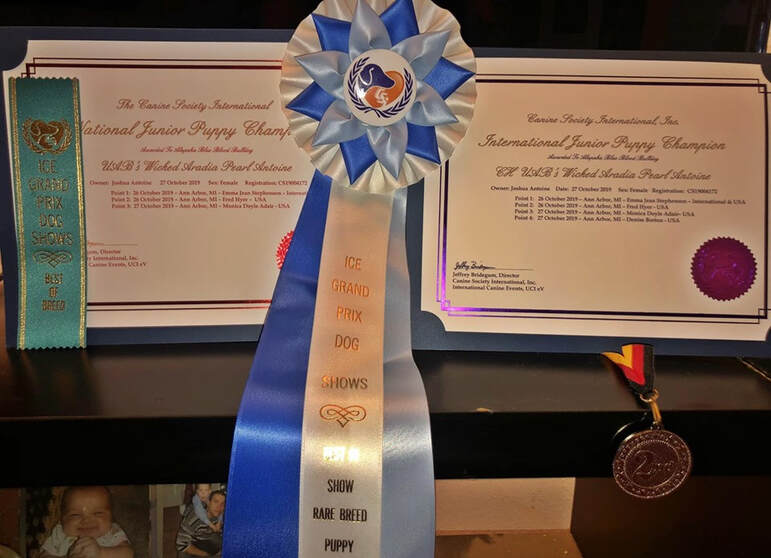 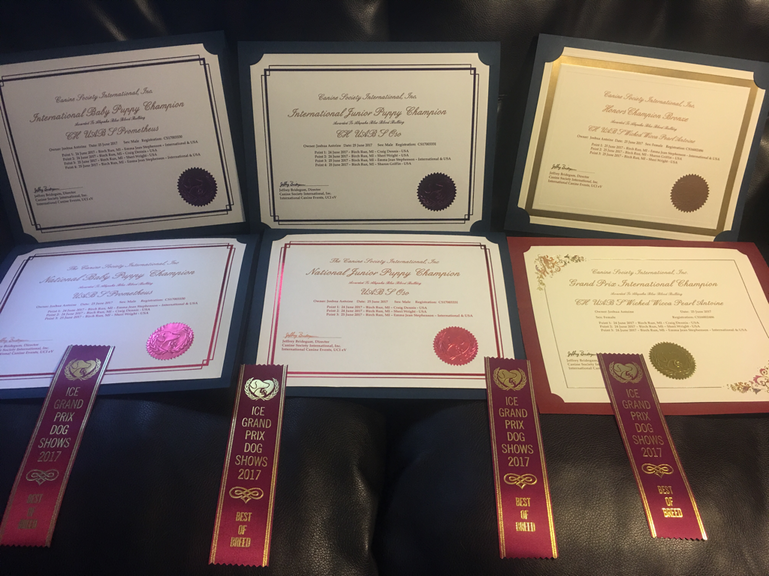 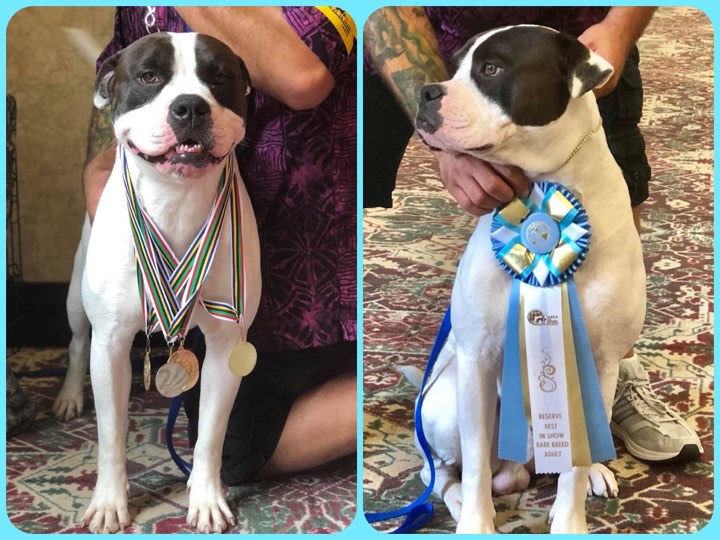 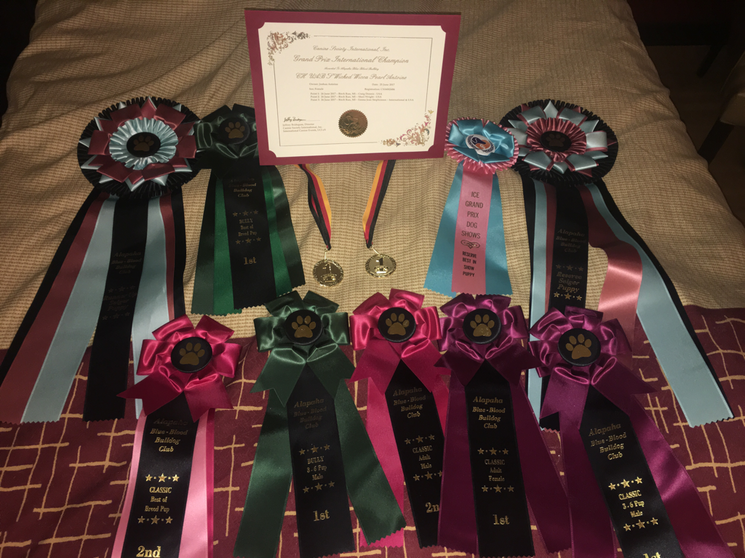 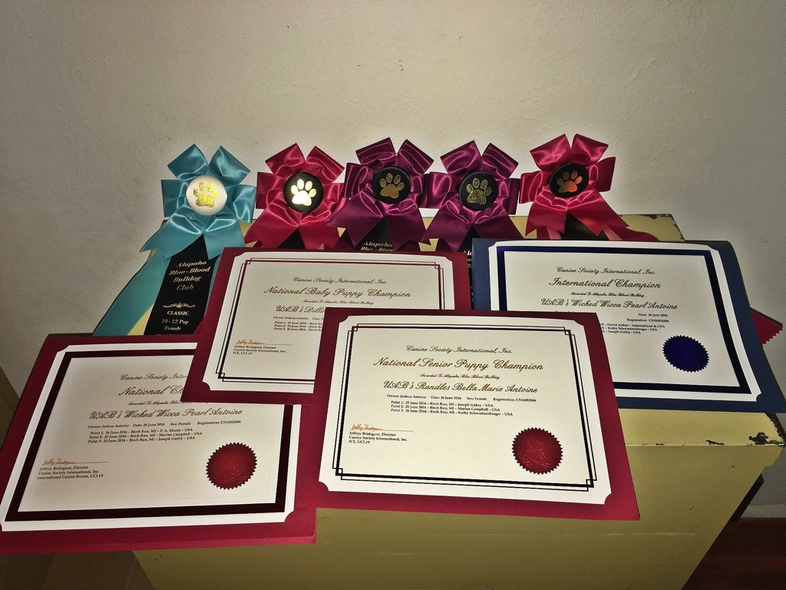 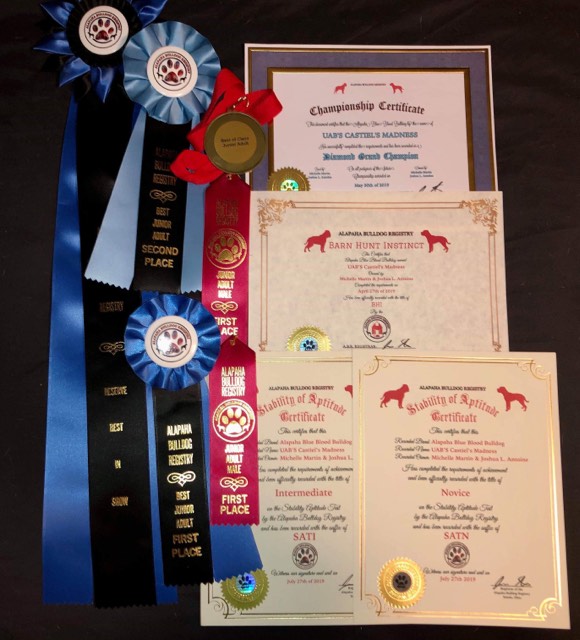 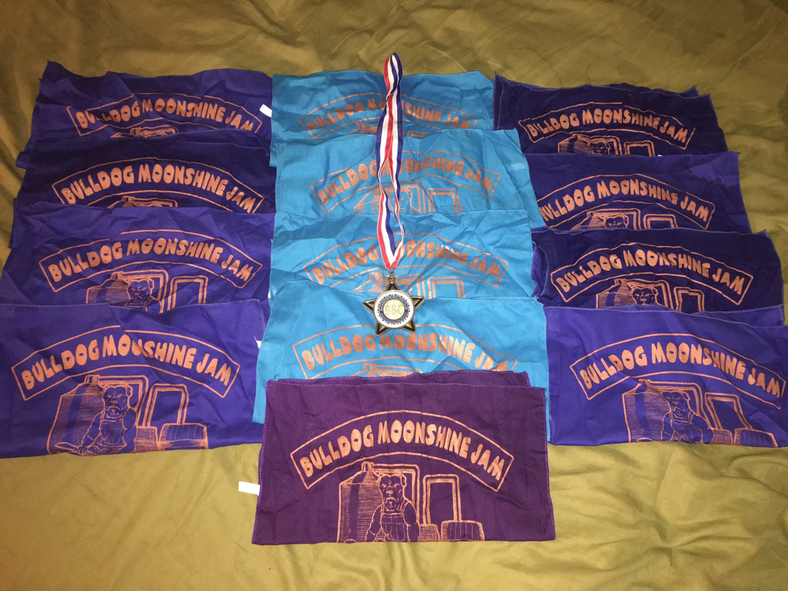 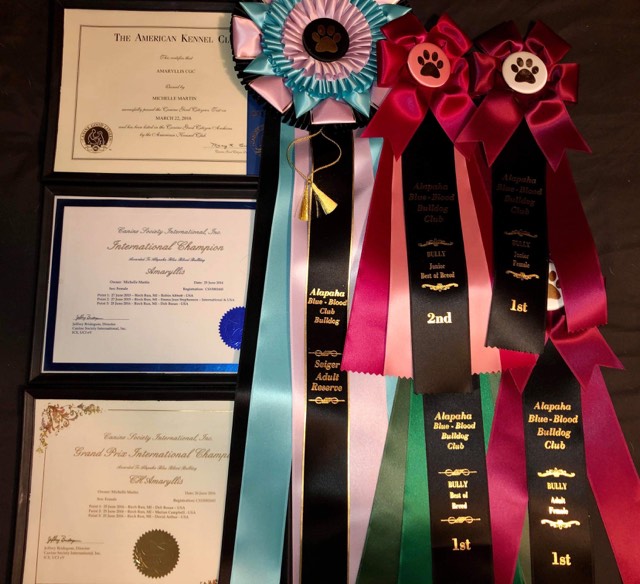 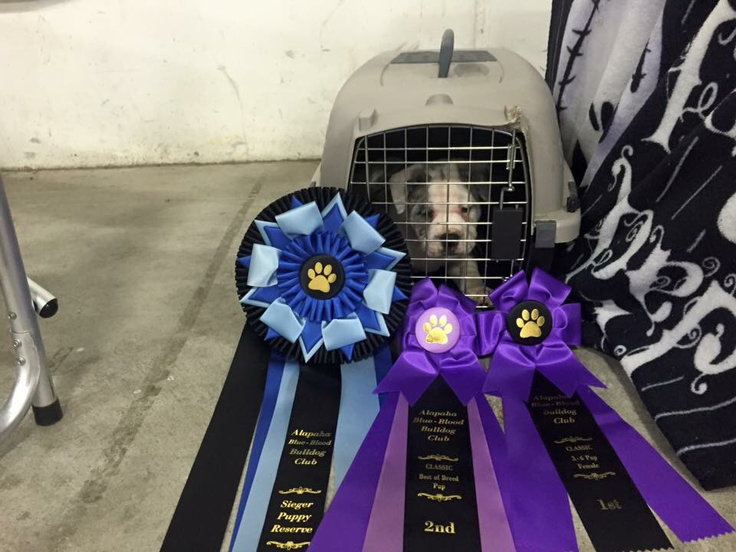 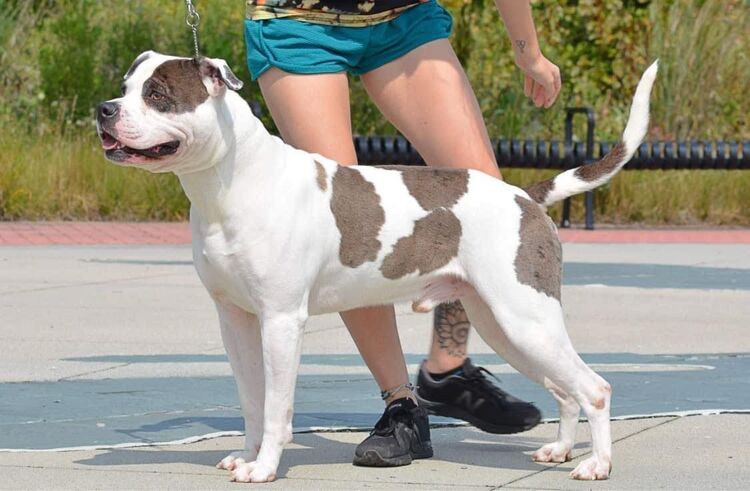 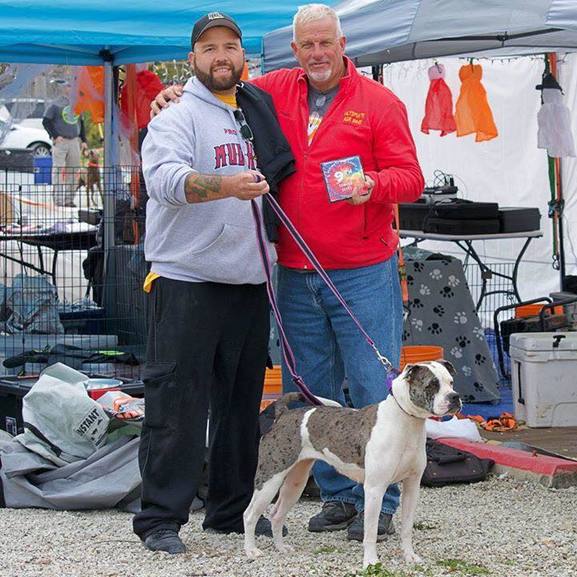 Wicca became the first Alapaha Blue Blood Bulldog to jump in the UAD finals. In the end. She placed 9th out of around 45 dogs total that jumped in her division. She was also the only bulldog at Nationals. Wicca and I also got to meet Milt Wilcox. Former World Series pitcher in 1984. Milt started Ultimate Air Dogs in 2005. UAD was the third organization to start canine dock diving. In 2008, UAD partnered with the United Kennel Club (UKC) which added dock jumping as a recognized UKC sport. Dogs can get UKC titles by competing in dock distance or height jumping like they can in agility, obedience, weight pulling, and others.
It was super cool talking to him about Wicca and the breed. In a brief few minutes, I explained the origins of the breed and their temperament. Let’s just say I think the breed gained another fan because he seemed to love her and the way she fired off the dock like a missile! 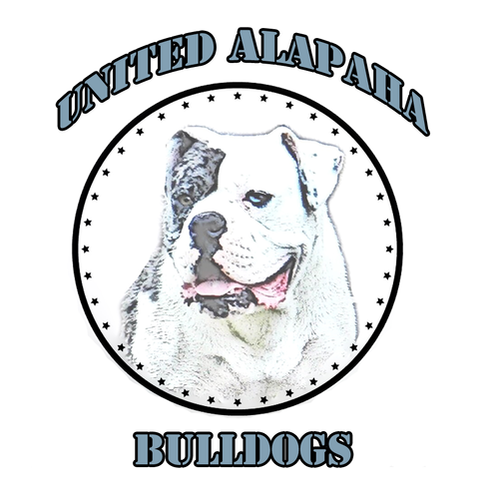